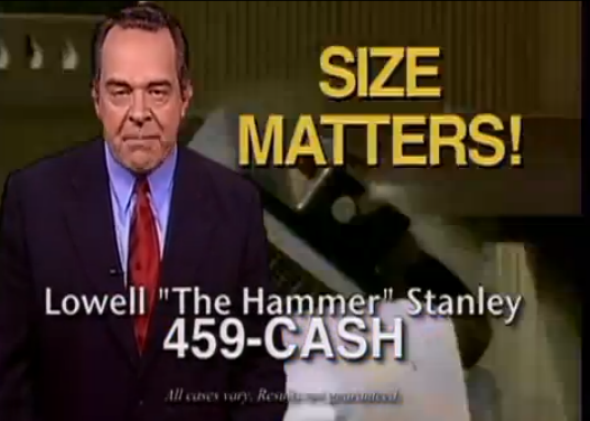 When an accident happens, victims are often unsure of where to turn for help. Many choose to hire an attorney to assist them with collecting compensation for damages. This raises the question of how accident victims choose their attorneys, and the answer for many is advertising.

The Norfolk Personal Injury Lawyers with Lowell “The Hammer” Stanley recently got a nod for their advertising style in a recent podcast. In fact, the hosts of the series declared some of the firm’s ads worth of placement in the legal advertising record books.

99% Invisible’s host, Roman Mars, talked about Stanley’s use of flaming cars and explosions in his ads as a practice once prohibited by the American Bar Association. That restriction was lifted by a Supreme Court ruling stating that lawyers have the same rights to free speech as anyone else.

Lowell “The Hammer” Stanley and his team of attorneys are proud to take their place in legal advertising history books, and they encourage the public to stay aware of our media appearances by checking our Legal & Firm News.

A 24-year-old Navy sailor from Danville, Virginia, was killed on Tuesday in a motorcycle accident on Norfolk’s Terminal Boulevard, which roughly defines the southern edge of the Naval Station Norfolk complex.

According to The Navy Times, the man was traveling eastbound on Terminal Boulevard on his 2007 Suzuki GSXR 600 motorcycle when he lost control, hit a curb and was thrown into a guardrail around 1:50 p.m.

Officer Chris Amos told The Navy Times that the victim was “weaving in and out of traffic at a high speed.”

The motorcycle continued to slide eastbound along the road.

Amos also told The Virginian-Pilot that no other vehicles were involved in the crash.

The victim was transported to Norfolk General Hospital where he was pronounced dead.

The details of this crash remain under investigation.

The victim was serving in the Navy and was assigned to the carrier Harry S. Truman, to which he’d reported in September 2007, according to Navy Personnel Command.

The Navy reports that this was the third off-duty motorcycle mishap fatality in fiscal year 2012, which began on October 1. In fiscal year 2011, 12 sailors died in similar accidents involving lightweight, high-speed sport bikes.

If you or someone you know has been the victim of a Virginia auto accident, the injury lawyers at Lowell Stanley can help.

A man was injured in a drive-by shooting very early this morning in Norfolk, Virginia, and police say they are still looking for the person(s) who did it, reports The Virginian-Pilot.

The victim was reportedly walking with two other males at Orange Avenue and 1st View Street around 1:10 a.m. Tuesday morning when a shot was fired into the group from a passing vehicle that’s been described as light-colored, perhaps white or silver. Witnesses have also indicated that the car might have been a Honda Civic.

The victim was transported to DePaul Hospital with what police spokesman Chris Amos calls non life-threatening injuries. No other information about the victim has been released.

As of yet, the suspect has not been found. Detectives are investigating the circumstances, vehicle description, and suspects.

Why do you think drive-by shootings have become so prevalent in the U.S.? What can be done to thwart the trend?

If you or someone you know has been the victim of a Virginia auto accident, the injury lawyers at Lowell Stanley can help.

A Newport News, Virginia, man was burned on the job on Tuesday, August 9, while working on the roof of a church.

HamptonRoads.com reports that the man suffered an electrical burn around 10 a.m. when he came into contact with an electrical line that powered a rooftop air conditioning unit. The man — an employee of Hampton, Virginia-based Tidewater Roofing Company — was helping to repair the roof of Saint Paul AME Church on 2500 Chestnut Avenue.

The Newport News Fire Department used an aerial tower ladder from one of their trucks to bring the worker safely down to the ground — blocking thru traffic on Chestnut and 26th Street for 30 minutes.

The victim was transported to Riverside Regional Hospital with non-life-threatening injuries. His name has not yet been released.

Who do you think should be held liable for this on-the-job Virginia accident? Do you think this will become a Virginia workers’ compensation lawsuit?

If you or someone you know thinks they can claim Virginia workers’ compensation, the injury lawyers at Lowell Stanley can help.

Fill out this form to receive a free initial consultation today!

Practicing throughout the Commonwealth of Virginia.